With the release of the film Pride on the 12 September 2014, there has been a large increase in interest in the Lesbian and Gay Support the Miners (LGSM) material held by the Labour History Archive and Study Centre. LGSM set up during the 1984 – 1985 miners strike and served to challenge many prejudices. By 1985 there were 11 LGSM groups all over the country; the London group alone raised £11,000 by December 1985. The recognition of LGBT rights by the unions and Labour movements during the miners’ strike led to a formation of a network of LGBT groups for the members of the Trade Unions, which is still going strong today. 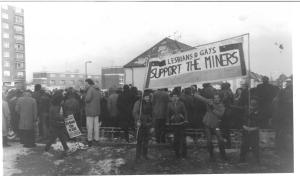 The archive holds two boxes full of posters, pamphlets, hymn sheets, newspaper articles and minutes from numerous meetings. Although, predominantly the boxes are focused on LGSM, there are other collections available. One example is the Labour campaign for lesbian and gays rights. Within this collection there is the “Legislation for Lesbian and Gay Rights: A Manifesto”, this ultimately is the Labour Party campaigning for more equality for LGBT groups with regard to the Labour movement. 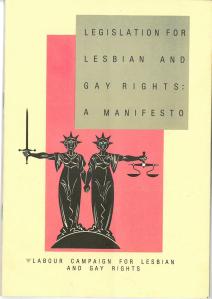 The support of the Communist Party of Great Britain continues, when a campaign by the conservatives to petition against the introduction of homosexual and lesbian education is met fiercely by the CPGB, with letters and posters being published asking for all LGBT groups to come together and complain against this petition.

The second box particularly focuses on members of the LGSM movement, along with letters to and from the movement. There are numerous letters containing donations to the movement which suggests that they obtained a huge amount of support across the nation considering the amount of donation letters there are in the collection. Within the collection there is some material solely based on the miners’ strike itself and its progress. This collection on the whole is extremely interesting and contains some excellent material focussing on a topic that is very personal to a vast amount of people.

< Previous Next >
+ Add your own event Eventbrite